Burnley Football Club are proud to unveil the new home shirt to be worn for the 2007/08 season.

Following the announcement of a two-year sponsorship deal with Holland's Pies, the Baxenden-based company will have their name emblazoned across the front and back of the new shirt, which is again manufactured by Italian sportswear manufacturer Errea, and the new 125 years anniversary kit , The new home shirt is predominantly claret, with blue trim. It features a retro V-neck in blue, with the sleeves also trimmed in blue and club embroidery on both sleevesThe club's new-look gold crest is a key feature and gold piping across the front of the shirt accentuates the overall appearance

The shirt, which is available for pre-order, costs GBP 31.99 for all junior sizes and GBP 39.99 for adults

In a return to tradition , the new shirt is accompanied by white shorts with claret trim down both sides. The socks will also be white, with claret and blue trim.

Burnley FC retail supervisor Paul Stanworth said: "The new kit is the result of exhaustive meetings between club officials and Errea and we are delighted with the results.

"I am sure the shirt will prove popular with supporters young and old." Chairman Barry Kilby with shirt sponsor Holland's Pies' officials at the launch

Vince Edes, Holland's Pies Sponsorship Manager said: "We are delighted with the new shirt and we at Holland's are immensely proud to be named as shirt sponsor for the next two seasons."

Errea export manager Fabrizio Taddei added: "In 2006/2007 the combined efforts in development and design of Errea sport and Burnley FC produced a kit which the Football League decided was awarded the Best Kit design of the entire league. 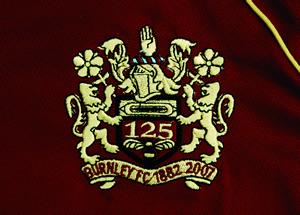 This new shirt (and shorts) are both made from a fabric which utilises Active Dry technology, which is at the cutting-edge of research in technical fabrics.

This means that both garments provide not only a superior fit, without being restrictive, but also aid in the rapid evaporation of perspiration which helps to prevent the body overheating, which in turn helps to sustain prolonged athletic performance." 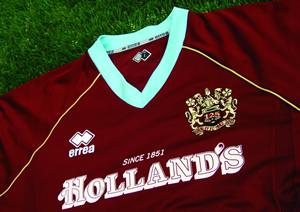 Mr Taddei added: "Errea Sport are extremely excited to be entering into another two-year relationship with Burnley FC and are proud to again be associated with such a prominent, yet traditional , football club. "We look forward to the continued success of our relationship over the coming seasons and wish the team even greater success on the pitch. 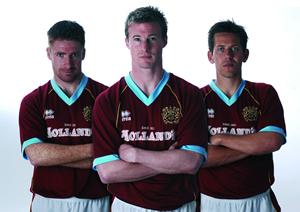 "Football is our passion and clubs do not come more passionate than The Clarets."

does anyone know the release date of the 08/09 shirt?

Does anybody know when the shirt is out ? :-?

this kit is ok but old badge is betta

not bad kit mate though would prefer nike, i also made a kit but dont know how to post it , it was the 07/08 white kit with the villa badge in the middle, sponsored by fly emirates and made by nike