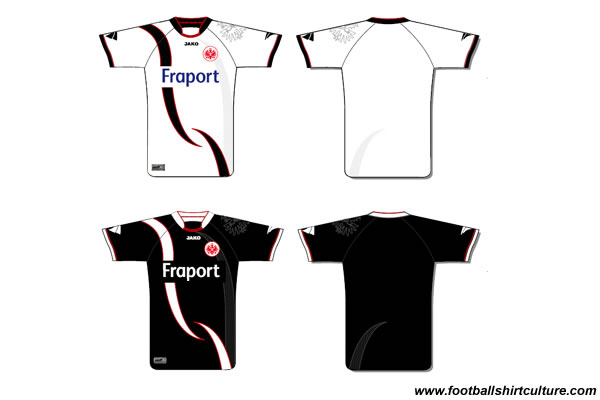 Eintracht Frankfurt and its equipment manufacturer Jako say, "Thank you". More than 600 supporters and friends of Eintracht Frankfurt followed the call, to send in proposals for a new design for the away - and home shirts for the Bundesliga 2008/09 season.

In an online survey of registered users on the official club website, eintracht.de were 16 creations. There were two clear winners: a space occupied white jersey, which on the front had a large black cross. And landed in second place, closely behind, a model, which on the front shows supposed eagle claws.

After careful consideration, they decided not to realize the winning jersey with the cross, as the symbol on the front has a religious background. Because the traditional Italian club Inter Milan received sharp criticismin wearing a similar jersey in the current Champions League competition, Eintracht Frankfurt decided after careful consideration to choose for the second winner, the one with the claws.

Sales launch of the new home and away shirts is expected in June 2008.

That kit is just cool 8)

After careful consideration, they decided not to realize the winning jersey with the cross, as the symbol on the front has a religious background.

<br />Nice shirt but you have to feel sorry for the original winner! You would be a little bit cross!

risky one, congratulation to jacko to having balls<br />and do dragon(!) patterns where others go simple