BORO have launched Top Idol, a poll to give the club's supporters a chance to choose next season's new home strip. And all those taking part will be automatically entered into a prize draw to win a trip to Italy to be first see the new kit.

Almost 80% of fans who took part in a previous Battle of the Band poll voted for the famous white chest band to make a return to Boro's home shirt for 2008-09. Now the club are asking supporters to choose their favourite from three shirt designs, each sporting the iconic chest band. Errea, the club's Italian kit manufacturers, have produced three prototype designs, one of which will be Boro's new-look home shirt for the start of next season. 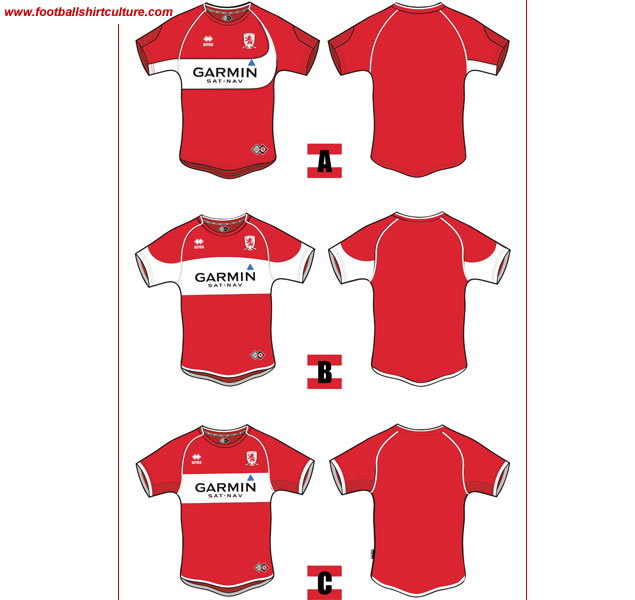 It is now up to the passionate fans to vote for their preferred choice of Shirt A, B or C. The design receiving most votes will become the Boro home shirt for the 2008-09 season. Those fans taking part in the poll will be entered into a prize draw to win a trip for two to the Italian cities of Parma and Milan.

The winner's prize will include a two-night stay in Italy, all travel and expenses, and a visit to Errea's factory to see the shirts being finished for transportation to Teesside. Neil Bausor, Middlesbrough FC's Chief Operating Officer, said: "The fans have taken part in polls to choose the new away shirt on numerous occasions in the past, but this is the first time they have had chance to vote for the home strip.

"Our supporters are far more than just customers. They feel a passionate and emotional attachment to the club that goes way beyond watching the team on a Saturday afternoon.

"We are committed to developing better communications with our fans and we want them to feel that this communication is two-way and that they are actively involved with the club. The opportunity to take part in this poll is part of that ongoing process.

"Having voted overwhelmingly in favour of a return for the chest band, we hope they will take this chance to have a further say on an issue that we know is important to many of them." Fans can take part in the poll here

From Monday, fans will also be able to vote a third way by picking up a postcard from the MFC Retail stores, Riverside Stadium reception, the Evening Gazette offices on Borough Road in Middlesbrough, or from BBC Tees in on the edge of the town centre. Voting closes at 12 midnight on Friday January 25.

wow! there all gorgous i cant choose!

how about drop errea altogether! they r rubbish

these kits are excellent i choose A

these kits are abseloutely fabulous i choose A

these kits are greeeeeaat i choose A. p.s i have a long hed

A is better than the others ones

A is the best

Boro are the worst club in the Prem for changing their kits every season...

i thought we was getting rid of erea... looks like we might not b tho bt i hope we do because its about time we got adidas or nike e.t.c...

They all look terrible :zzz , but i\'d go for A because of it\'s originality compared to the others.

So Kit A it is then (if my sources are correct)<br /><br />anybody any ideas what the away kit is like??

There all nice but the best one ild say is A

:zzz they are all boring

Why choose the 2 uglyest players to modle them? and i choose A all the way

A is easily the best. Why cant we get rid of errea even legue 2 teams have better makes.

i voted 4 a aswell. i got it. got afonso alves on the back.

There are no comments posted here yet
Load More