New Away Kit Unveiled The U's are delighted to unveil their new look away kit for the 2007/8 season.Smart Energy extended their sponsorship deal earlier this year, something confirmed on the official website at the end of last week.

Company CEO Alan Berry popped down to Layer Road to take a look at the new strip, along with the two new goalkeeper shirts that will be worn next season.The red strip, with navy blue design, also features a new look Smart Energy logo compared to last year's colouring.

The goalie kits will be the same for home matches, except they will have haart branding as part of the new home sponsorship deal.

Pat Baldwin and Dean Gerken were on hand to model the strips.

Colchester United Football Club is an English football team who play in the Championship. The club was formed in 1937, and briefly shared their Layer Road home with now defunct side Colchester Town F.C. who had previously used the ground from 1910.

Colchester United are perhaps most famous for beating Don Revie's Leeds United 3-2 in the 5th round of the FA Cup in 1971.

Colchester Town F.C., nicknamed The Oyster's, were the local side, established in 1867 and playing at Layer Road from 1909 until 1937, when they were dissolved. The stadium was originally owned by the army, who have a strong presence in the town, until it was purchased by the club in 1919. Colchester United was formed and took over Layer Road, which has been their home since the formation of the club. 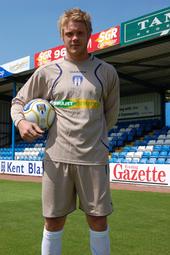 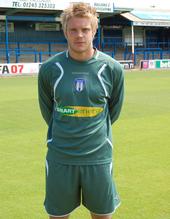 Colchester United's primary rivals are fellow Essex club Southend United. During November 2006 Colchester registered their first competitive victory over the Shrimpers since December 1989, by a margin of 3-0, taking the overall competitive head-to-head record for the rivalry to 28 wins to Southend, 22 wins for Colchester with 16 draws.

There is also a rivalry with their geographically closest club Ipswich Town, whom they met for the first time in a league fixture for almost half a century in the 2006/07 season. A 1-0 win at home followed by a 3-2 defeat away for Colchester saw Ipswich take their overall competitive record against Colchester to a dominant 8 wins, 3 losses with 4 draws.

There is also a rivalry with Wycombe Wanderers dating back to their days in the Football Conference. Colchester United don't have a great record of success against these rivals, and only against Wycombe do they have a superior head to head record.

i love that team

i work for smart energy :lol: