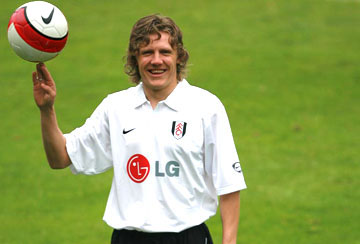 Fulham Football Club has today announced a major four-year kit supply deal with Nike, which will see the world famous swoosh logo on the Premiership Club’s shirts, until 2011.

The four-year deal, in conjunction with Nike’s team sports partner Just Sport, is the biggest kit supply agreement in the Club’s history. Which, along with the Club’s recent shirt sponsorship announcement with LG , reinforces the Club’s growing stature within the football industry.

The future 07/08 season Club kit reflects the Club’s historic past with a modern revision of the all-white home shirt first worn in 1903 and a black and red striped away shirt, worn during the 1974/75 season, in which the Club reached its first FA Cup final.

The kit will become available to fans in July. 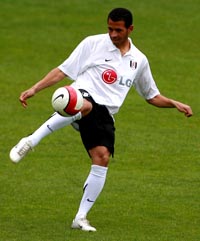 magnitude to the Club. The Chairman has, only yesterday, announced his commitment to invest this summer to develop and improve our future on the pitch, and we have made considerable strides off the pitch in terms of our commercial objectives. Today’s announcement is another step forward in fulfilling our goals of becoming a Top Ten Premier League Club both on and off the field of play. We are delighted that our supporters will next season be wearing Nike branded kit to our games, and we are confident that we will share a long and happy association with the brand."

"We are delighted that Fulham will be joining teams such as Brazil, Manchester United, Celtic and FC Barcelona as one of our football partners. We’re proud to be working with such a famous and historic club and we look forward to a long and mutually successful relationship with them."