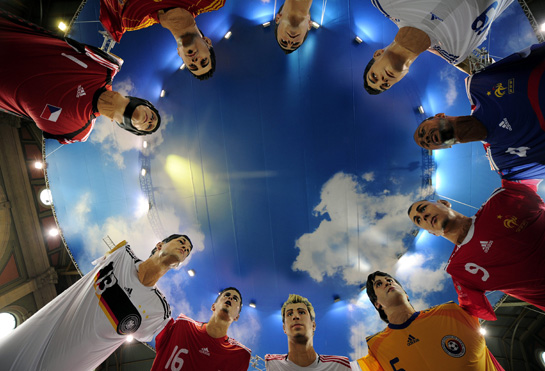 Adidas presents the tournament’s stars supersized. A 17-meter-high huddle of players welcomes fans at the Zurich train station. At the Vienna Prater, a Petr Cech likeness 42 meters in size sporting eight arms holds even the most impossible shots – and in front of the MuseumsQuartier in Vienna, fans can marvel at giant-sized football boots which are the bigger than life versions of what some of Europe’s best players will be wearing during the tournament.

These spectaculars were developed by adidas and their advertising partner TBWA Berlin (180/TBWA) as highlights of the current ‘Dream Big’ campaign by 180 Amsterdam (180/TBWA) especially to capitalize on the UEFA EURO 200 excitement.

Bernd Wahler, adidas Chief Marketing Officer Sport Performance says; "adidas is the world’s leading football brand. We do not only excel at innovating the best possible football products, we also continue to surprise and excite our consumers with truly spectacular marketing executions. Our current ‘Dream Big’ campaign and these amazing spectaculars are excellent examples of this fact.’’

At 10.00 a.m. on June 5th adidas will reveal a circle of players, doing the huddle. Eleven colossal doubles of football stars from nine different countries make up the circle. The players stand arm in arm and cheer for each other at the top of their voices and in their own language twice a day during rush hour (at 8 a.m. and 6 p.m.). The huddle is formed by Ballack and Lahm (both Germany), Van Persie (Netherlands), Cech (Czech Republic), Charisteas (Greece), Villa (Spain), Benzema and Vieira (both France), Chivu (Romania), Ivanschitz (Austria) and Barnetta (Switzerland).

The circle measures 33 meters in diameter. Just the heads of the footballers displayed in great detail are three meters high. The self-supporting work of art weighs over seven tons and doesn't require any suspension from the ceiling. Paintbrushing experts crafted every body part with meticulous attention to detail. Over 50 people worked on the huddle figures day in and day out for more than a year.

Vienna hosts the second UEFA EURO 2008 spectacular by adidas. It is a 42-meter-high likeness of the Czech national team goalkeeper Petr Cech, one of the best goalies in the world. adidas symbolizes the sheer invincibility of Cech, who stands in goal for Premier League club Chelsea FC, with eight arms mounted onto the Giant Ferris Wheel and thus rotating around him. The entire area covered is about the size of a football pitch. "Being chosen for this fascinating project by adidas is a great honor for me," said Petr Cech. 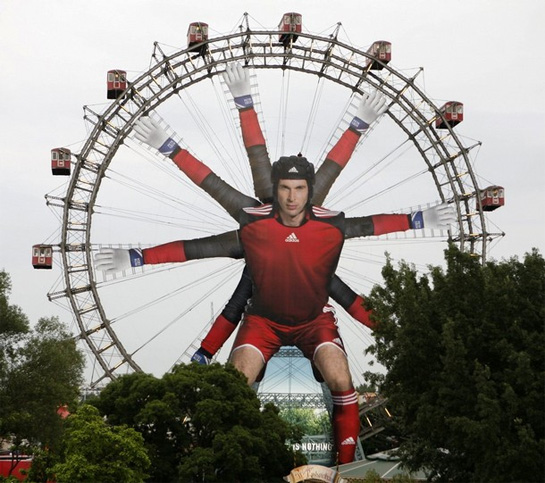 Apart from the giant Petr Cech, Vienna also exhibits the third adidas spectacular. Within the F50 TUNiT 16 range, adidas designed an individual UEFA EURO 2008 football boot for each of the 16 participating nations featuring many different national colors, details and facts of the respective country. These 16 different shoes are now on display as oversized models in front of the MuseumsQuartier in Vienna, each shoe as big as a mid-sized car. Prior to their placement, the oversized shoes took a long journey on two adidas trucks through both host countries, visiting the various national teams’ quarters. There, the individualized shoes were handed over to the players who will wear the shoes during the UEFA EURO 2008.

For the duration of the UEFA EURO 2008, adidas will be based in the Oval Hall and Arena 21 at the MuseumsQuartier. This will also be the point of contact for all journalists.

To be honest, that\'s some scary stuff.

To be honest, I think those boots are out of this world they are so cool!

hmmm, not a big fan of the fade effect and the central badge. Maybe if they were straight lines, without the fade... If you fixed those things along with the strange font and sleeve logos, I think it would be a good shirt. The only thing about the sleeve logos is that they would be covered by patches. A good idea, just work on it and it could be a masterpiece.

yeah your right about the sleeve badges there too big, i should of made them smaller. with regars to the font, why is it strange, its just something diffrent than the norm.

If there will be a 1.3 version, I suggest shorter stripes or less fade effect to leave more &quot;solid red&quot; in the middle. I like this shirt and I think it would work even with the badge on the right

Pretty good, except for the numbers and font which are gash.