The company provides a huge range of fitness data and performance monitoring through its software system. Players wear a small Viper pod during training and practice games which measures and transmits the data, which can either be monitored live or collected and analysed by coaching staff.

That data can be used to monitor individual players’ progress and also compare them to other squad members. The STATsports name and logo will be carried on the Sky Blues away kit and on the back of the home and away shorts.

Read Article
Philadelphia Union today announced that they have renewed their multi-year partnership agreement with Bimbo Bakeries USA, extending the baking company’s reign as the Union’s jersey and team apparel sponsor.
Philadelphia Union is one of eight professional soccer teams to don the Bimbo logo. Chivas de Guadalajara, Monterrey, and America of the Mexican top flight, Saprissa and A.D. Isidro Metapán of Costa Rica, San Francisco FC of Panama and the Rochester Rhinos of the United Soccer Leagues are all also sponsored by Bimbo.
Read more...

Read Article
Preston North End announced that they have agreed a deal with Virgin Trains to become the Club’s official shirt sponsor. The parties have signed a two-year-deal that will see the national rail provider with their brand on the front of all first team, youth team, Academy and replica kits.
The new collared Nike home shirt, featuring the Virgin Trains logo and traditional navy shorts also has a return to the popular hooped sock.
Read more... 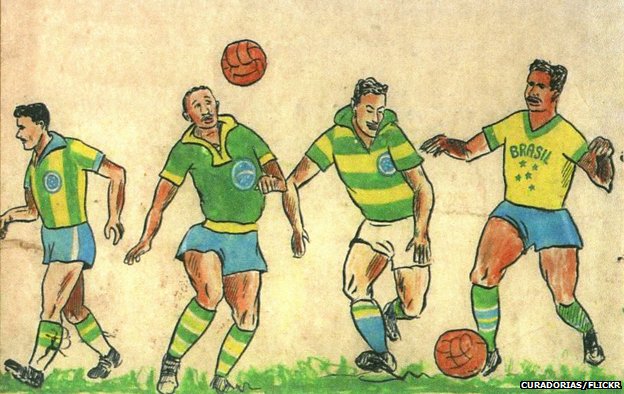 Read Article
The Brazil shirt is a familiar sight the world over, but the story of how it came to be designed - after a shocking defeat - is much less widely known.
It is an international symbol of joy. A football shirt that conjures up images of the game´s greatest players, playing the beautiful game in the most beautiful of ways. It has become synonymous with the glamour, magic and fun of Brazilian football on the backs of players such as Pele, Jairzinho, Zico and Socrates, who took football to new heights during the second half of the 20th Century.
Read more...

Read Article
So is it acceptable to wear a football shirt/kit? A form of this question has been asked this week, and answered, in a manner of speaking, by Guardian fashion journalist Hadley Freeman (me neither). The World Cup´s on - it´s silly season, where mainstream journalists talk rubbish about something they know nothing about.
Ms Freeman actually starts out ok, identifying that the wearing of football shirts is often (nay, generally) to denote affiliation or leaning. Yes, it can be used to create a sense of community, Hadley, but also to differentiate oneself from others.
Read more...

Read Article
It is the dream of football obsessed fans and kit nerds all over the world. As Rio de Janeiro remains the epicentre of the world for another fortnight, the most popular choice of clothing on the city´s beaches isn´t slim swimwear, but national team football jerseys.
The fan-fest on Copacabana has transformed the beach into a near-24-hour party. No longer are thongs, bikinis and boardshorts the fashion of the sand, but jerseys, flags and other football tops.
Read more...

Read Article
Imagine Cruising will be the new mainline sponsors of Swindon Town from the start of the 2014/2015 season.
Based in Swindon, Imagine Cruising has built a reputation as one of the UK’s leading luxury holiday companies offering cruise and stay holidays to destinations around the world. Imagine are strong supporters of their local community – the new two year sponsorship deal will contribute to the local economy and promote Imagine Cruising at Swindon Town matches around the country.
Read more... Read Article
An exhibition of football jerseys that includes a Nazi-era shirt and one from Mussolini's fascist regime is raising eyebrows from visitors to a busy shopping mall in this Brazilian city.
The exhibition includes more than 100 replicas and originals from different nations, dating back to the first World Cup tournament in 1930.
Salvador doctor Duda Sampao, the owner of the collections, said that the exhibition has been endorsed by the local Brazilian World Cup organizing committee, and therefore has the consent of FIFA. World football governing body officials refused to comment, referring the matter to local organizers.
Read more...

Read Article
When Bert Patrick´s knitwear company, Admiral, started producing the official England football kit - the first to include the manufacturer´s logo on the chest - he paid the Football Association £15,000 a year for the privilege. The revolutionary deal, in 1974, allowed Admiral to sell British-made replica shirts to supporters for £5 - increasing to £9 with shorts and socks included.
Now Nike, the current England kit manufacturer, has a £25 million sponsorship deal with the FA, and charges fans up to £90 for a replica shirt.
Read more...

Read Article
Fake England football shirts and memorabilia worth £250,000 has been seized in a raid in the Black Country, just hours before the World Cup began.
More than 2,000 of the seemingly-flawless fakes, complete with real-looking branding, price tags and labels, were taken by trading standards officers from two houses in Wednesbury.
Officers at Sandwell Council said the copies were so good that even they were fooled. It was only when they scanned the barcodes that the shirts were revealed to be fakes. Officers raided the two homes after a tip-off about the shirts being sold on Facebook for £20 to £30, while a real Nike England shirt could cost £90.
Read more...