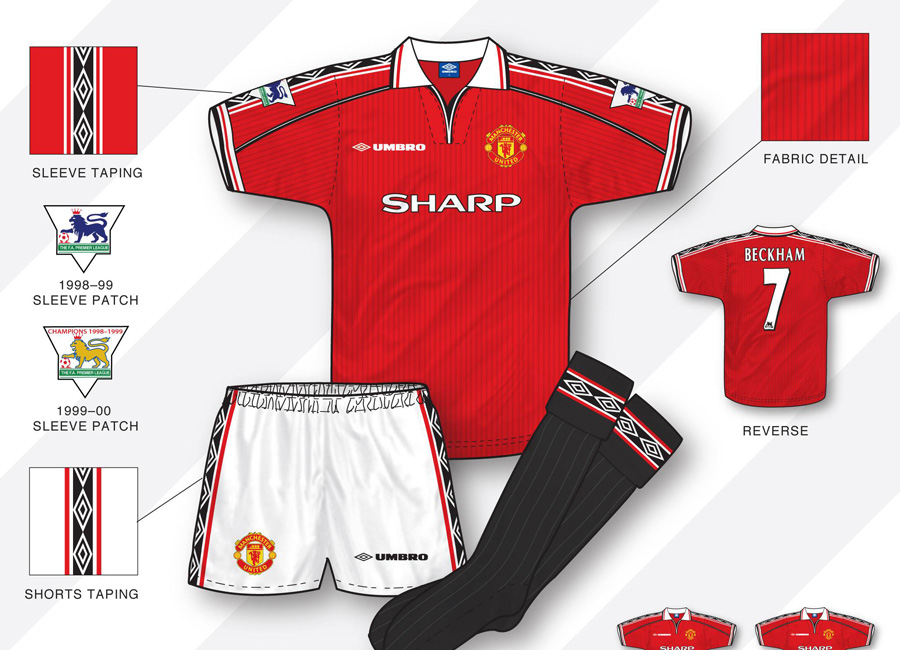 One of the all-time great United kits and the last to feature the club's long term sponsor, Sharp. With it's old-fashioned white collar the strip echoed Umbro's first kit from their return to Old Trafford in 1992 but what really made this shirt shine was the addition of a new rendering of Umbro's famous diamond taping from the 70s.

This was enhanced with additional white lines on either side and worked just as well on the shorts. The taping brought unity and cohesion across all elements of the kit.

With wordmarques finding favour in the world of apparel marketing in the late 90s, Umbro's logo was dominated by their name, with the double diamond reduced in size to just a supporting role.

Neat white and black piping arched across either sleeve that accompanied the clever locking 'zip' placket.

The strip lasted for two seasons and accompanied Fergie's men in a magnificent treble in the 1998–99 campaign - the club's most successful.

In many ways, the kit was the end of an era. A final farewell to the postmodern 90s with the path now clear for a sleek minimalist approach that was to dominate kit design in the new millennium.

Visit truecoloursfootballkits.com. Keep up to date with True Colours by following @TrueColoursKits on Twitter

That's good. I think the brands should think retros for next year.

Is there any forum for publish our desings also ?